My Name Is Bruce, And I’ll Be Your Server Tonight–Why American Waiters Cannot Keep Their Distance

The idea of a French waiter introducing himself to patrons at a Parisian restaurant would be unthinkable, a breech of propriety, ignorance of cultural norms, and an unwarranted intrusion.  No one wants to know anything about Pierre from Metz other than how the caneton a l’orange flambé is prepared, the arrivage of the fines de claires, or whether or not the roti de veau is seasoned before roasting or during the preparation of the sauce a la crème. Diners already know where Pierre is from because of his pronounced northern accent; are aware that he is working class because waiters are always sons of carpenters, factory workers, and farmers; and understand that never in ten lifetimes would he or anyone like him be a guest in their homes. 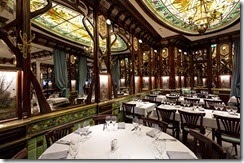 What the patrons do expect is impeccable service, a respectful distance, a deferential but confident attitude, and quiet efficiency. They do not want any more than the perfectly fileted sole, the quick whisking of crumbs between courses, and the precise placement of silverware. A meal well-served is one where the waiter is there only when you want him, politely attentive to your needs, and responsive to your queries. 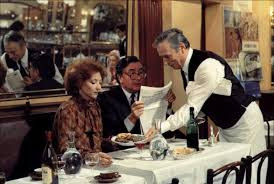 “My name is Bruce, and I’ll be your server tonight” is expected in American restaurants. Bruce is no different from his diners, and although he might not have their pedigree, he is their equal.  He is working his way through college, finding himself, writing poetry, or helping to support his family. In some cities like San Francisco, Bruce is more than likely a peer – a locavore who works only in restaurants which espouse his commitment to local produce and environmentally friendly growing and food preparation.  Waiter and diner are two complementary parts of a progressive food dyad.

Knowing his name and soon understanding his special commitment to his job is indeed important.
In most other cities, Bruce, like his French counterparts, comes from the working class, is not on a fast track to Wall Street, Harvard Law, or Washington, DC; and is simply working at the few jobs available in a tight market.  He is no different from medical technicians, sports club trainers, or clerks at Wells Fargo; and the diners at his table, like those in France, know this, have quickly sized him up, put him in an appropriate socio-cultural box, and listened to his ‘specials’.

The faux intimacy of American dining doesn’t stop with ‘My name is Bruce’. The repeated, intrusive, and unnecessary “How’s everything here?” is part of the package. It would be wrong to neglect diners after so personal an introduction.  The affability and sharing are part of a complete package.

Worse yet is waiters’ compliments about diners’ food choices. “That’s my favorite”, says Bruce.  “Excellent choice.” Yet the chances that Bruce has ever tried the seared foie gras, the fettuccine ai tartufi, or the braised lamb shanks in browned garlic and rosemary are next to nil. He is from Gaithersburg, Plainville, or Petaluma.  His budget allows for pizza, wraps, and schwarma. He carries dishes to and from the kitchen and leaves the chefs and deuxièmes to their trade.

At the restaurant at a well-known lodge in Northern California not far from Bodega Bay, the servers are all Mexican. From their pronounced accent and age, it is clear that they have been in the United States for only a short time.  Restaurant work has always been the first step on the American economic ladder, and these waiters and waitresses have made it out of the dishwater and into the dining room.

At dinner during a recent visit, I overheard a diner ask the waitress – a Mexican immigrant – what she recommended from the menu. None of what was her diet - rice and beans, tamales, tortillas, and the occasional asado – was on the menu; but in heavily accented English said that her favorite was the nettle flour organic ravioli filled with locally grown North Coast porcini in a Bartlett Creamery crème fraiche sauce. “Wonderful”, said the diner. “I’ll have that.”

America is supposed to be a classless society; but since no culture has ever been without social hierarchies, class distinctions, castes, or other differentiating markers, we are just as classifying as any other.  The class categories are simply less traditional and and at times obscure.

Take for example, Hector, the waiter at Le Chaos, a trendy, boutique restaurant in the Mission in San Francisco.  He is working class (his father worked on the Oakland docks and is mother was a nurse), gay, and working to pay for his final transition to a transgender woman. Which is most relevant to the familiarity-seeking patrons of Le Chaos? Given his emerging social and cultural cachet, his working class background, high-school education, and first generation immigrant roots might not be impediments to his rise in the social order.

However, most conservative patrons dismiss his diversity as irrelevant to his economic trajectory.  No matter how much San Francisco hipsters might embrace his personal choices, he will never be able to rise above the levels of his poor education, simple upbringing, and working class neighborhood influences.

The ideal blend of Old World restaurant manners and traditions and New World diversity would be to have Hector behave like a professional French waiter in an upscale Left Bank restaurant, but offer the required cultural connection of San Francisco.

The advantage of American food culture is that it is never stagnant.  California, the leader of culinary trends for decades, is unlikely to remain in place for long.  Soon enough more sophisticated diners will have had enough with the ‘locally-sourced’ phenomena, and realize that sophisticated GMO crops grown commercially taste even better than the often gnarly locally-grown varieties; and that the phenomenon of the small, independent farmer will be short-lived indeed.  As high-quality food becomes cheaper and more available; and as the most experienced diners pass on the small-portioned, architecturally Baroque, exotic meals of the Mission, restaurant service may also change.

There will be no need to bond with the waiter who shares a common belief in organic farming.  We will get past Bruce’s happy intimacy and demand better service. Dining will ultimately become more French where only high-quality food and service matter.

A restaurant in Apalachicola, FL indicated on its brochure that provided ‘Non-invasive’ service, and went on to say in so many words that diners would be served efficiently and respectfully, but otherwise left alone.  This, I thought, might be an important market-driven turning point.  A niche which might go viral.

Of course I was wrong. The waitress – a young woman from the upcountry Panhandle near Georgia – simply couldn’t keep her distance.  She introduced herself, poured water when our glasses were half-empty, and asked us how we were enjoying our meal. Shaking old habits will be difficult.
Ron Parlato at 1:41 PM
Share